One of the first things that was asked was what do you want to be called? Good question. I have never been asked that before. My parents named me and that is what I was called. I was labeled with a nickname when one of my nieces couldn't pronounce my name. I was labeled with another nickname years later when a neighbor's child couldn't pronounce my name. When Nathan was born I became Mom. Now I have a choice! This child will have me and Stacy's mom and Jerry's wife to differentiate between. Should we become Grandma Helen, Grandma Pat and Grandma Chris?

My friend Sandy was called Grammy by her grandchildren and I loved that, but that was her. I'm not sure I am a Grammy. I know grandmothers who use their ethnic background (Tita and Noni) but I'm not sure what the Norwegian word for grandmother is. A friend's mother is called Darcy because her name is Dorothy and that is the way her first grandchild said her name. I'm not sure I want to leave this one up for grabs - I could be HaHa all over again.

David is set with being Tito, but I did not know. I have a few months to come up with something.
Posted by Gram at 12:36 PM 2 comments:

In 1979, you didn't know you were having a boy or a girl until they were born. It was somewhat like Christmas morning. But in 2008, if you want to know you can find out. Nathan and Stacy opted to know the sex of the baby. The week before their ultrasound, they asked me if I wanted to know. I told them, I would probably figure it out when they started buying pink or blue items. So on September 12th, Nathan called me at work and told me they were having a boy. Here are my two favorite pictures. 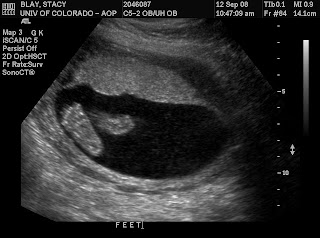 I just love the little feet! 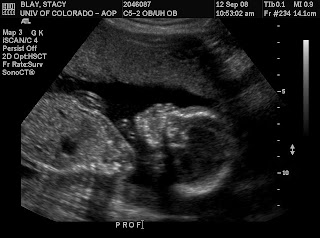 Nathan asked me if I was happy the baby was a boy or if I would have rather had a girl. I couldn't care less as long as the baby is healthy and he is and that makes me ecstatic. 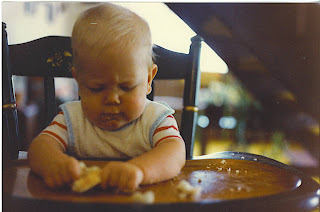 I came across this picture of Nathan and wondered where did the 29 years go? My baby is going to be a daddy.

So many things have changed and not just Nathan. Ultrasounds are common place. Caffine is out of the question. Bumper pads are bad. The cribs we used are unsafe. But there is one thing that hasn't changed and never will - babies steal your hearts.

The journey actually began a few months ago. I have been intrigued with blogs for sometime, but when we heard we were going to be Grandparents, I finally had a topic! There is some catching up on all the news and I have a lot to learn. There will be more posts in the beginning and more than a few mistakes, but you are invited for the journey. So here is the first post:

David and I are going to be grandparents! Nathan and Stacy are expecting in February. We were actually told on Father's Day but were asked not to tell anyone until the first trimester was complete. I did not tell anyone and it was one of the hardest things I have ever done. I was bursting with joy and happiness and wanted to share it with someone. David, on the otherhand, told Gary and John and his parents. I found out and stopped Gary and Vivien from saying anything at dinner one night. The second trimester began on July 21st. Just in time for me to share the news on our Girls Weekend in Estes Park. It was such a relief to let it out. I thought Janice would probably know since John did, but he had not told her. Bless his heart, he thought it was my place to share the news.
Posted by Gram at 8:02 PM No comments: