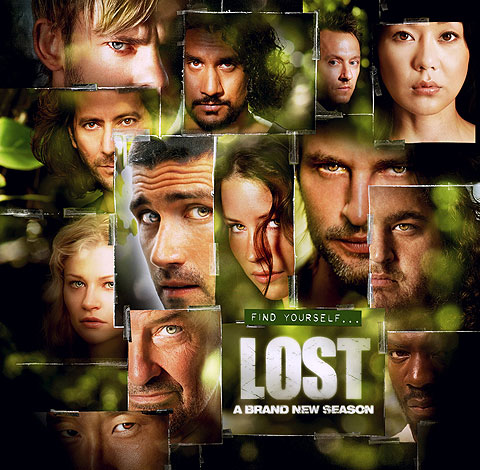 We didn't watch Lost when it first premiered five seasons ago. Nathan told us it was a good show and thought I would like it. He knows I like shows like Quantum Leap, The 4400 and Dead Zone. I just never started watching it until last summer. I decided to add it to our Netflix list and the first disc came in July. I watched the first show and was hooked. I didn't think Tito would be interested, it didn't seem like the kind of TV he enjoys. He watched the 2nd show with me and he was hooked. We would watch an episode now and then and maybe a couple on Saturday. One day Nathan mentioned the new season, the final season would premiere in February. I thought we should be able to finish the first five seasons by then.

But then Tito was in California for 2 months when his father was sick and died, then the holidays came. All of a sudden it was January and we still had 2 seasons to finish. We began to get serious and would watch three to five episodes at a time.

We finished today! We watched the last four episodes today and are ready for the final season to begin on Tuesday. And the way the finale from the last season ended, I am glad I didn't have to wait 6 months to see what comes next.
Posted by Gram at 7:47 PM 2 comments:

Do you ever want something even though you really don't need it? I 'm usually good about not buying things just to buy things. But there are a couple of items that keep calling my name. And I don't need them. 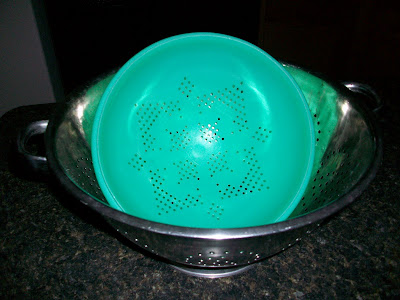 I have 2 perfectly good colanders. The green Tupperware I have had since the early 70's and is the one I use most of the time. I have had the other one for at least 15 years and use it most often for bringing veggies in from the garden.

But I have saw a new brushed stainless steel one that the holes are in the pattern of a leaf and I want it. Whenever I go into that store and see it, I think about what I can use it for - it is so pretty I could just leave the grapes in it after they are rinsed off instead of in a bowl. It is that good looking. Not that my family would notice because I leave the grapes in the green colander all the time. I haven't even looked at the price because that would be one step closer to buying something I don't need.

I am always cleaning closets and drawers and getting rid of things. I am always telling Tito we don't need anything else. I always roll my eyes when he brings home one more treasure. I cringe when I go into the basement and see all the stuff we have. I have never been one who considers shopping therapy. I shop for things I need. A few years ago, Tito and I decided to not buy anything except food for 2 months. We did not think that one through - we had 3 birthdays in those 2 months - but we did it.

So why am I wanting these things so much? I really don't know. I don't think I am trying to fill some void in my life with things. I am content with my life most of the time. Maybe, I just feel like a need a little treat, a little pick me up.

But aren't you supposed to want a new dress, new shoes or jewelry? Who is tempted by kitchen utensils?

Guess Who Came to Dinner? 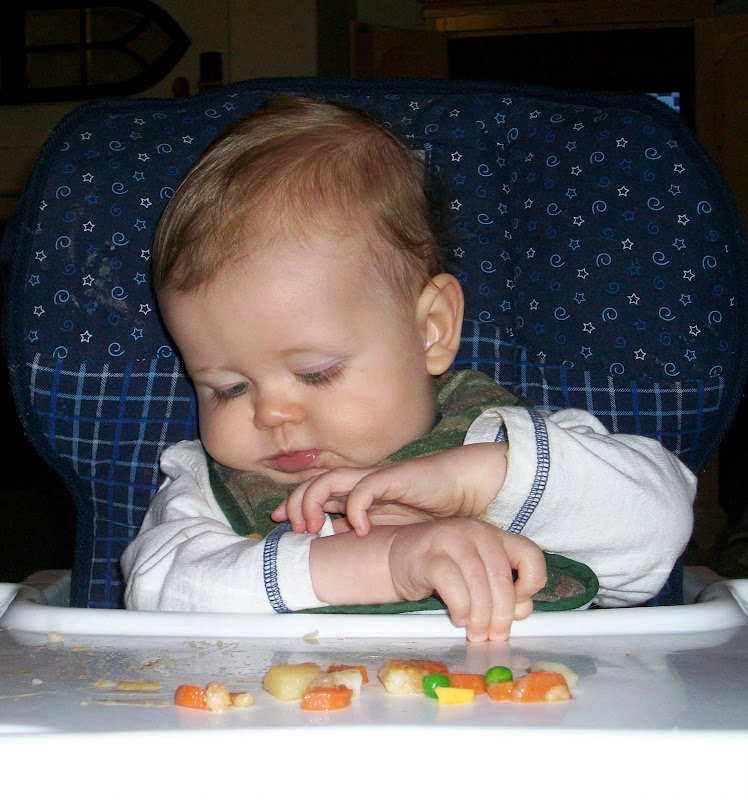 Nathan and Stacy went out to dinner on Saturday night and we got to keep Kaiden. We had so much fun with him, he is such a sweetheart.
Posted by Gram at 5:55 PM 1 comment: 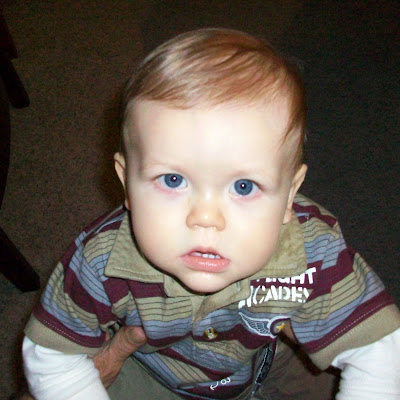 He had his bangs cut!
His first haircut!
Posted by Gram at 6:36 PM 1 comment: 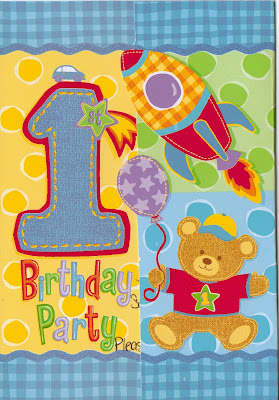 Two weeks from today, Kaiden will be a year old. How is that possible?
Posted by Gram at 7:20 PM 1 comment: 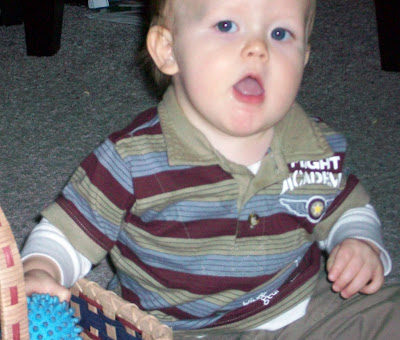 Everything you say to Kaiden, everything you ask him, he says yeah. He says it even when you don't ask him anything. I told his parents just wait until he learns to say no.
Maybe by then, I can learn to take pictures without cutting the top of heads off!
Posted by Gram at 9:27 PM No comments:

25 THINGS ABOUT TO BECOME EXTINCT IN AMERICA 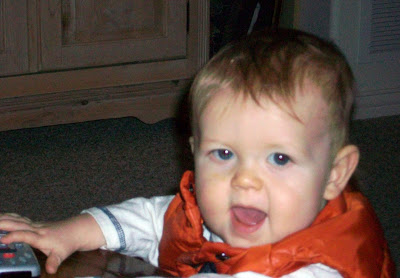 I had a lovely weekend. I slept until 7 on Saturday (that is sleeping in for me), brought coffee back to bed and watched TV for awhile. I cleaned out a couple drawers and our closet. I spent a lot of time on the computer (playing not working on my pictures) and a lot of time watching TV. We did go get coffee and had a wonderful time sitting and talking. We stopped at the grocery store and the kids were there also, Kaiden was asleep. We invited them to stop by for supper and called Carrie to come also (Dave was away for the weekend). I did some work on the new jigsaw puzzle but did not finish it.

It was a lovely weekend, hope yours was also.

I love the start of a weekend when there are not plans. It has been a long time since we have not had something we were committed to on a weekend. A holiday function, decorating the house, preparing for guests, undecorating the house. Don't get me wrong, I enjoy all those things, but every once in a while I like a weekend where I can putter. 'There are many things I should do this weekend, but I'm not going to do them. It has been a difficult week at work and the next 3 or 4 are going to be the same, so I need to do this for me.

I am not going to get out of bed until I want to. I might stay in my pj's and watch TV. I might work on organizing pictures on the computer and adding more to my digital picture frame. I might organize my wrapping supplies. I might clean out a couple of drawers. (I like to organize and sort through things.) I might work on a sewing project. I might go to the library. I might take my sweetie to coffee. I cook a new recipe. I might work on the new jigsaw puzzle I got for Christmas. I might see Kaiden.

Of course if Kaiden comes over, he will bring his parents and if I have the jigsaw puzzle out a puzzle fight might break out. 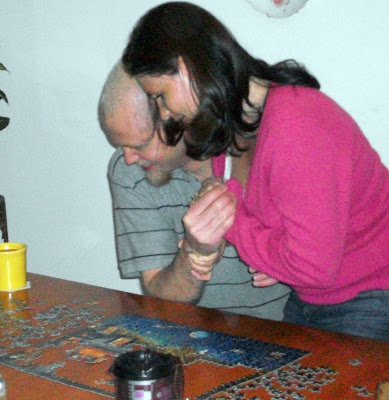 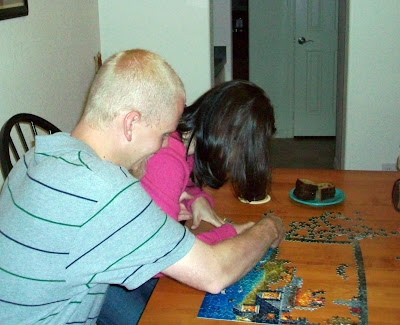 These two are very good at puzzles. They can walk past and pick up the piece you have been looking for and pop it into place. Nathan has done that since he was very young. They are also tend to be a little competitive.
That's okay though, I enjoy watching them have fun. The possibilities of a weekend like this are endless and that is why I love the beginning of the weekend. Hope you all have a good one!
Posted by Gram at 7:11 PM 2 comments:

Every January the National Western Stock Show is held in Denver. During the 2 weeks of the show, it always seems we have cold, frigid weather. The stock show doesn't start until Saturday, but the weather is here today. Coming home tonight the temperature was 2 and the wind chill was -15. The snow is supposed to clear out tonight, but the cold will stay for a few days.

Cold is a relative term. You see people all winter long in shorts and no coats. Our UPS man is one of them. I very seldom wear my winter coat, especially when I go shopping. It is easier to be a little chilly going to and from the car than carrying the coat in a hot store. My in-laws in California tell us how cold it is "it is only got up to 60". We tell them "it is so nice here, it got up to 60". I read follow a couple of blogs written by women who live in the South and they have been talking about the 2 inches of snow and cold that has shut schools and canceled church services. We would be shut down every week!

Since I didn't have my camera, I had to post this picture again. He looks like he is ready to go to the stock show. 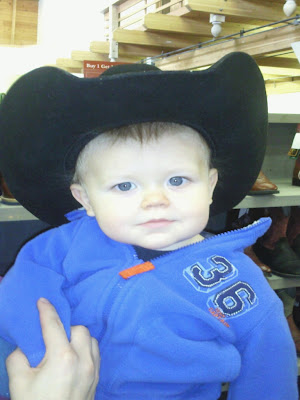 Kaiden is 11 months old today - it is so hard to believe. It is also hard to get a picture of him, he is always on the go. Crawling away or getting ready to, walking around furniture, dancing and talking up a storm. 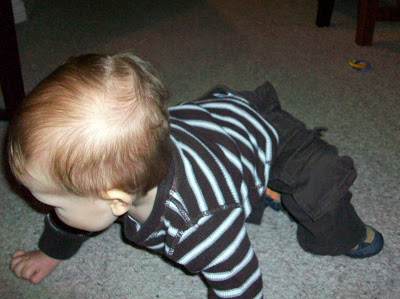 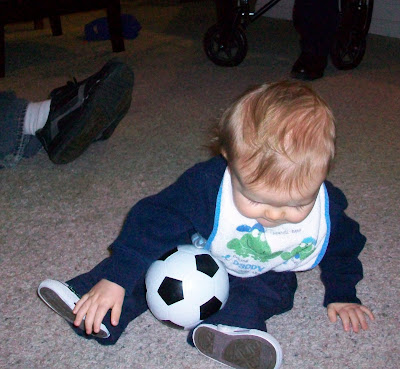 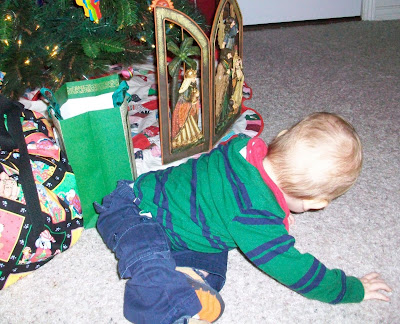 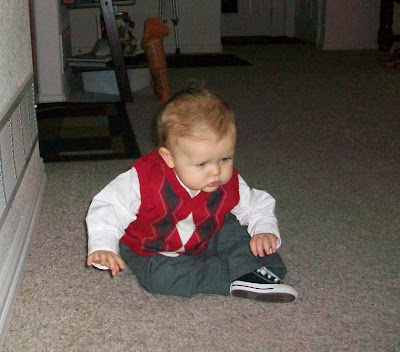 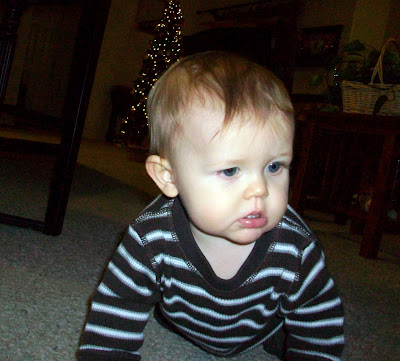 We very seldom do anything on New Year's Eve. Most of the time we don't even stay awake until midnight. But since Tito's sister and husband were here this year, we planned a party so they could meet all our friends. 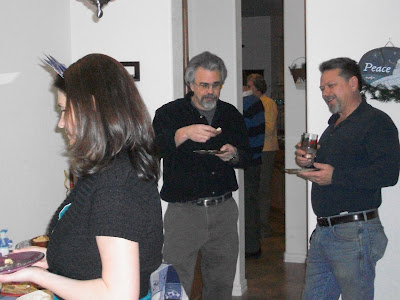 Everyone brought food - it was all good. 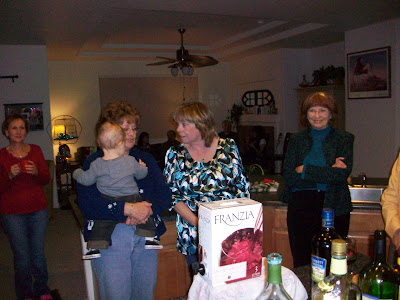 Everyone visited - some of us hadn't seen each other in awhile 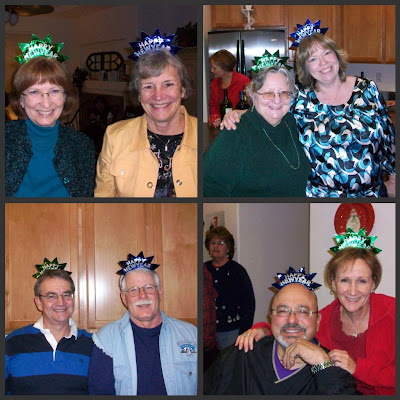 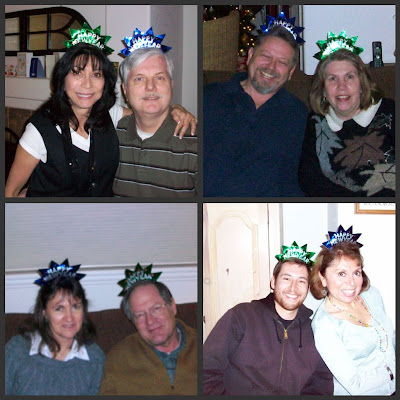 Okay, so I made everyone wear silly hats 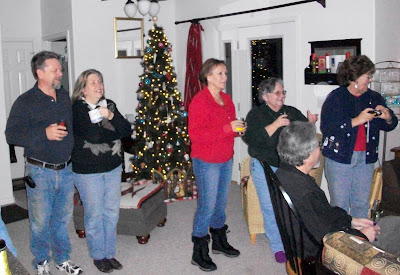 Waiting for midnight.
It was amazing to all of us that we outlasted the kids. Kaiden hadn't felt good all day and didn't want to sleep with all the noise, so Nathan and Stacy left early. Carrie was coming down with a cold, so she and Dave left early also. We had a wonderful evening. Hope you did too.