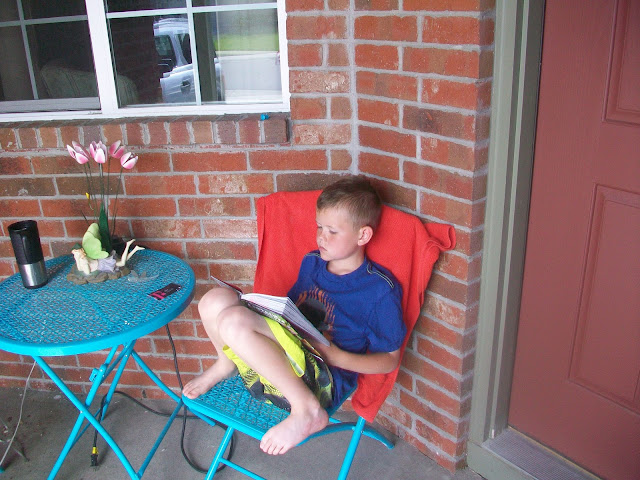 This boy loves to read.  We are so proud of him.  I know I was not reading at his level after 1st grade.
Posted by Gram at 5:31 PM No comments: 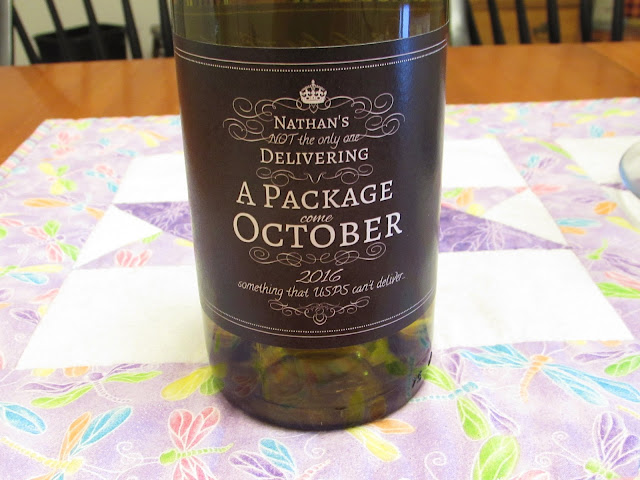 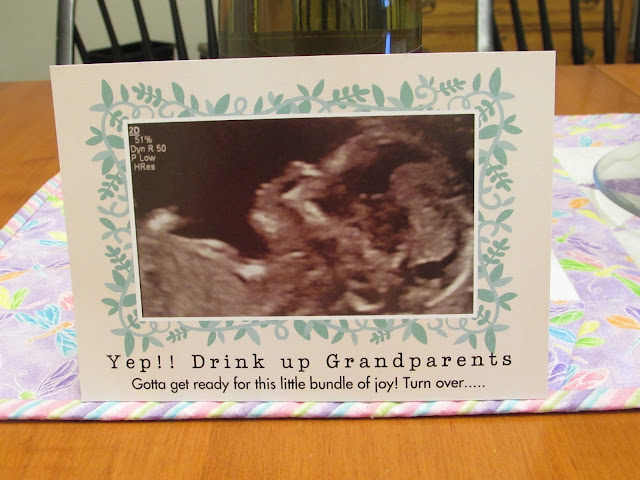 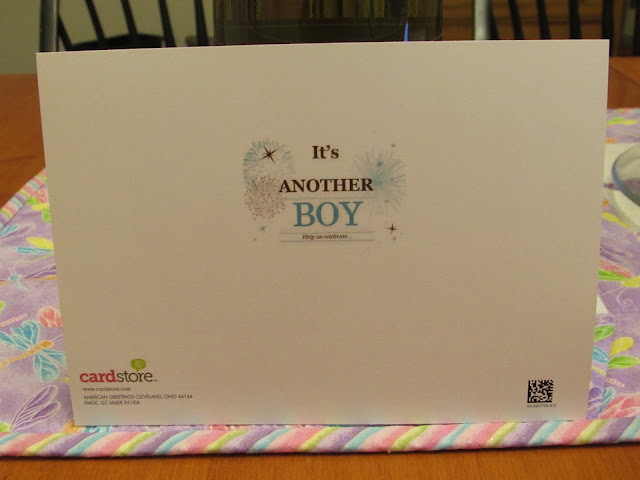 Gavin Lee due to join our family October 15th!
Posted by Gram at 6:42 PM No comments:

Another day I was home, we set up the sprinkler and let the boys run through it - a summertime oldie but goodie. 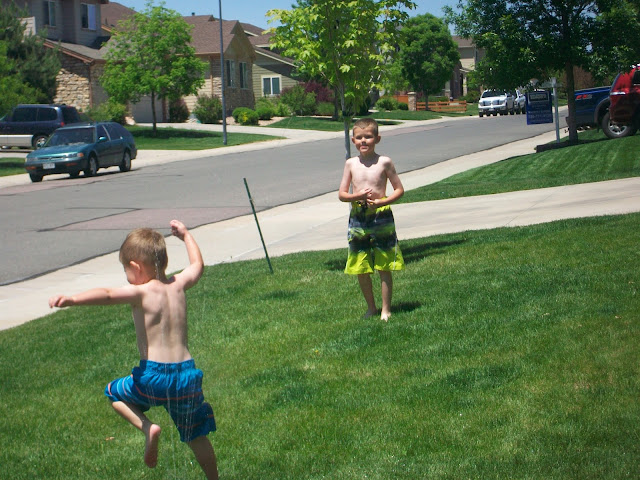 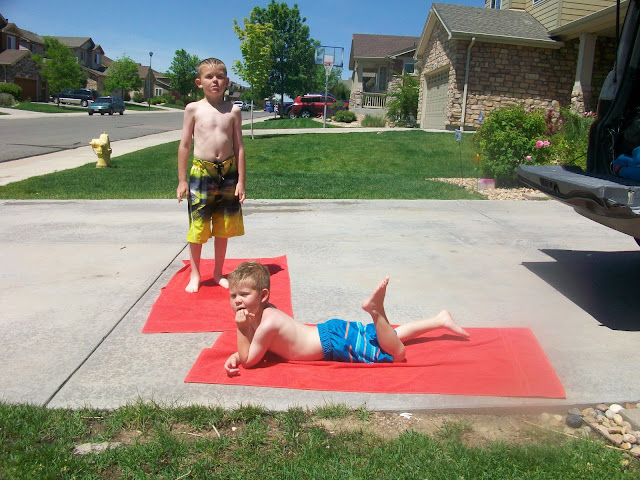 Then there was some drying off time in the driveway. 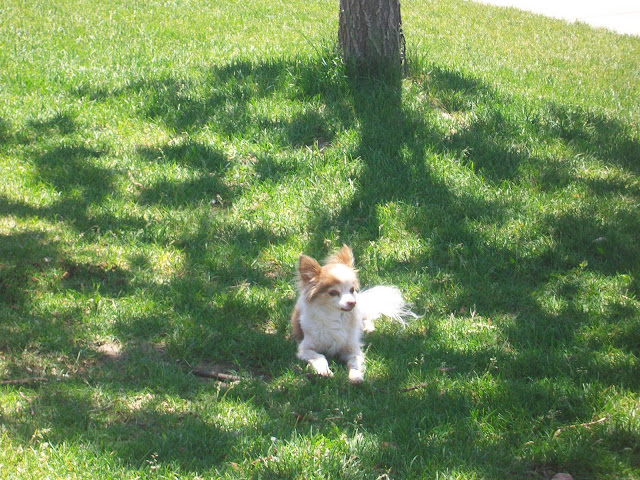 And Rocco just sat in the shade and watched.
Posted by Gram at 5:26 PM No comments:

After doing the robot exhibition, everyone was hungry, so we went outside and ate our lunch.  I think the boys enjoy picnics as much as I do. 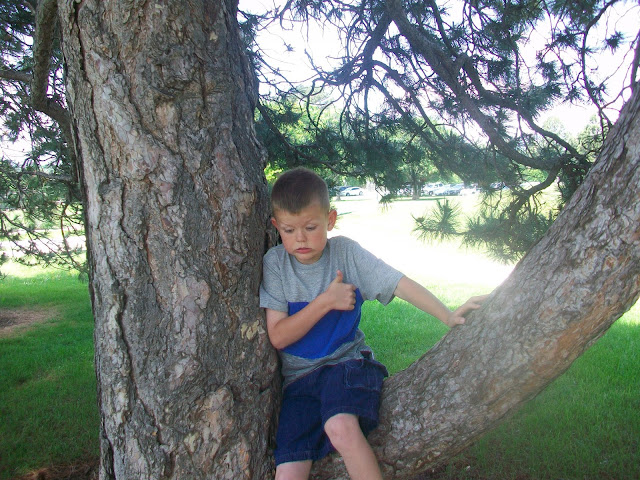 This was not very far off the ground.  Kaiden said he was pretending to be scared because it made a better picture! 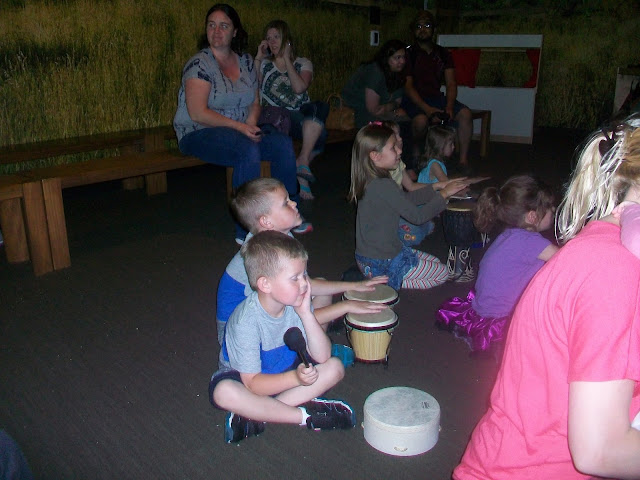 We went back in to the Discovery Zone where the boys unearthed dinosaur bones, played in the water, constructed chutes for balls to roll down and participated in the drum program.  They watched a short video about different kinds of drums and then got to pick out the ones they wanted to play.  Trevin was really more excited than these picture indicate. 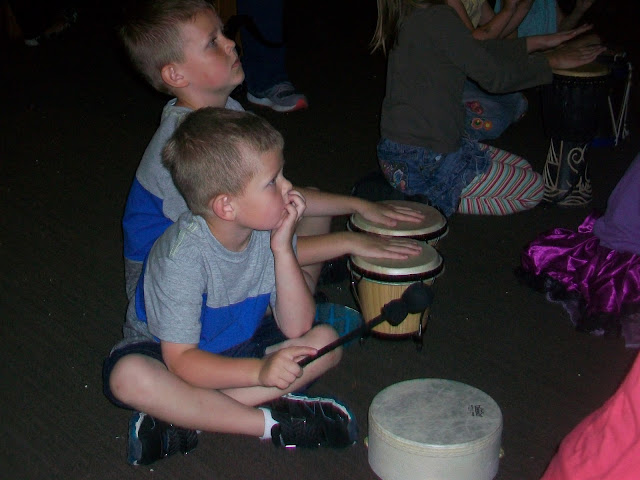 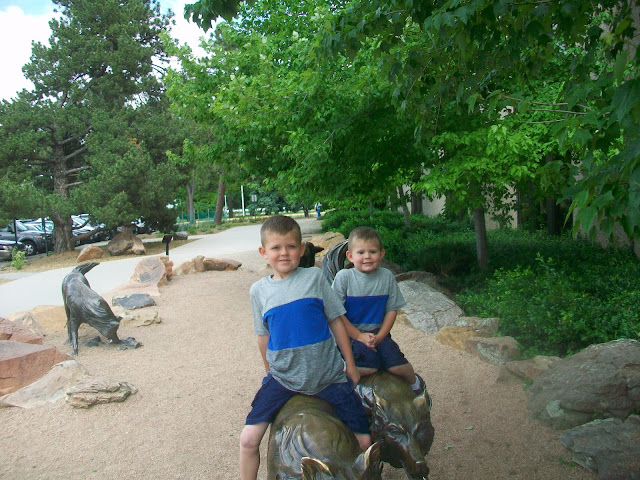 On our way to the car, they had to stop to ride the wolves.

One of my favorite places is the Museum of Nature and Science and since we have taken the boys there so often, I think it is one of their favorites also.  We took them one day I was on vacation to see the special Robot exhibition. 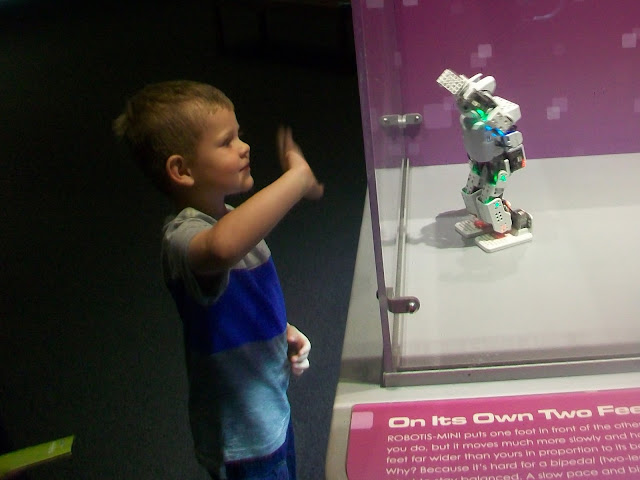 -
This robot waved, did karate chops, push-ups and several other movements. 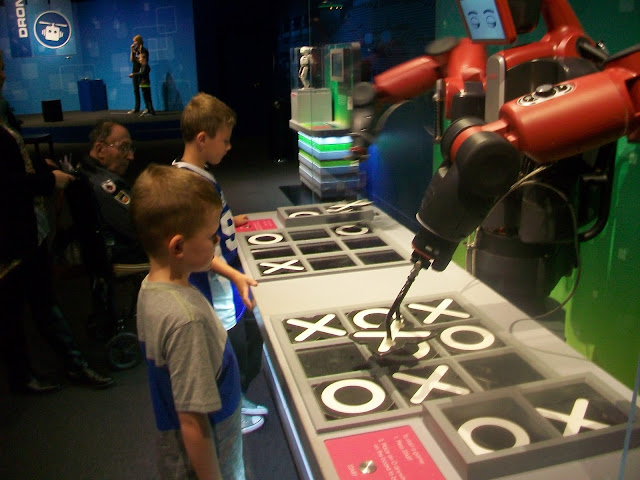 This robot played tic tac toe (it was a draw each time we played.  There was another one that played black jack. 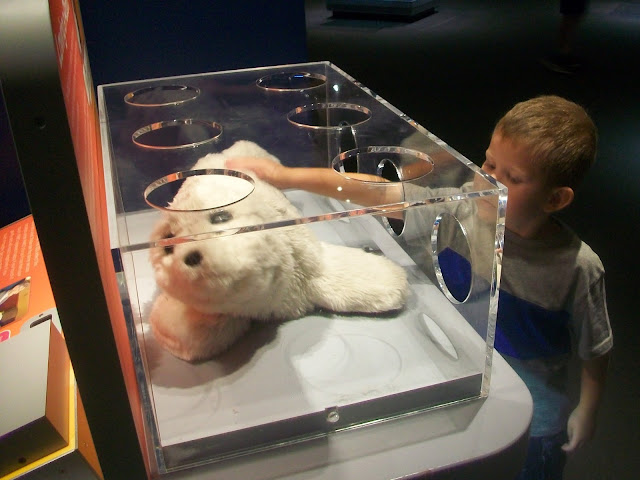 This robot moved and made content sounds when petted. 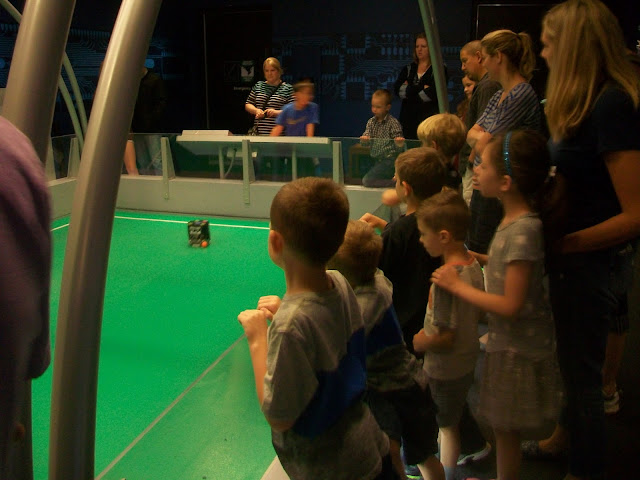 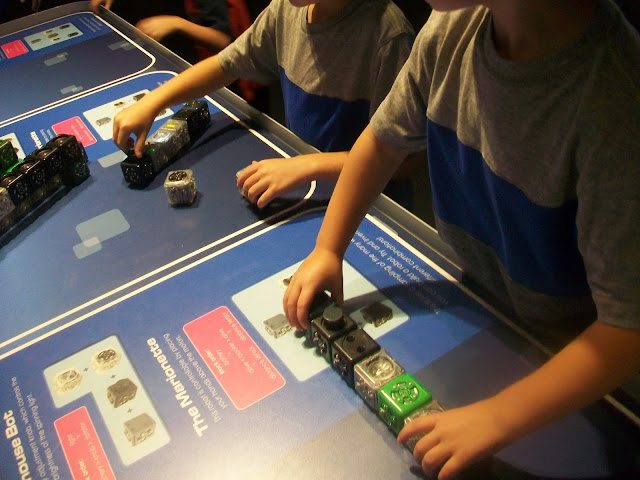 They got to put together modules to do different things like turn on a light. 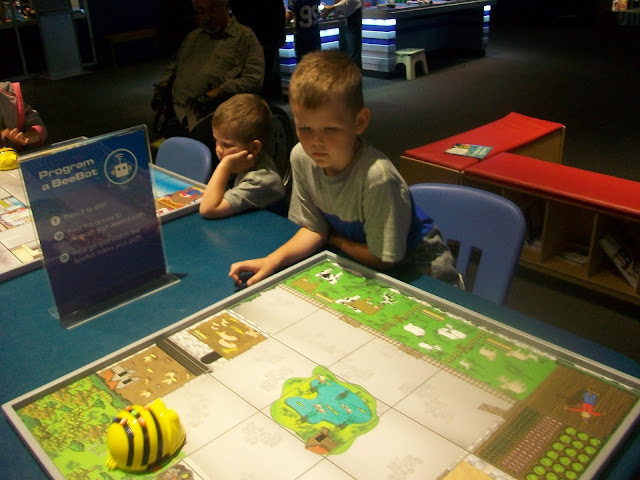 They could program this bee to go around the track. 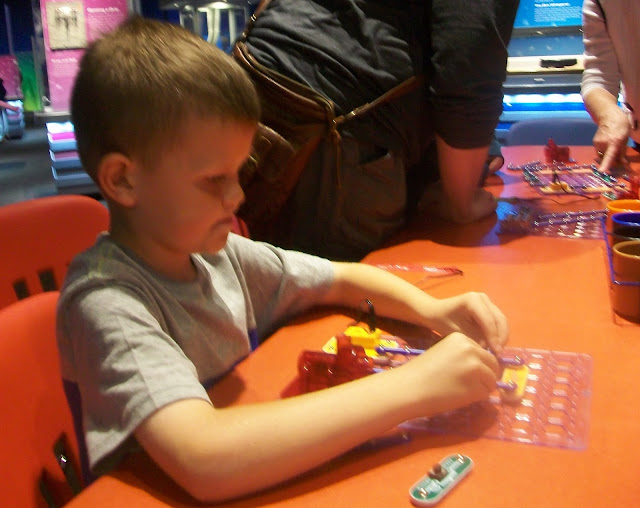 Kaiden is building an electrical circuit with on and off switches that ran a fan or turned lights on.  He built a model of a stop light. 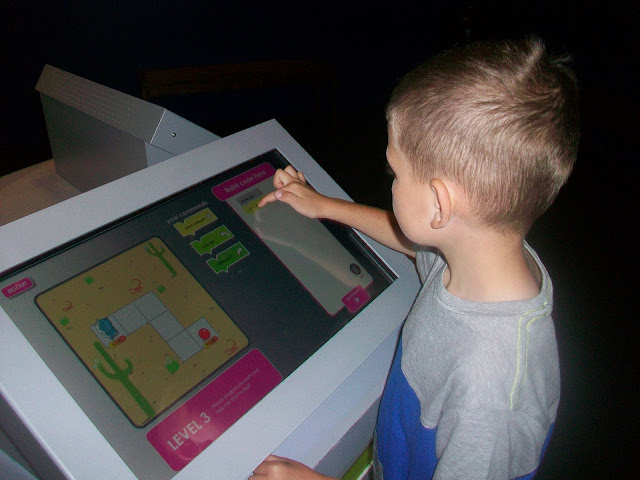 He is programming a figure to go from start to finish by writing in the number of spaces and turns that need to be made.
Posted by Gram at 4:04 PM No comments: 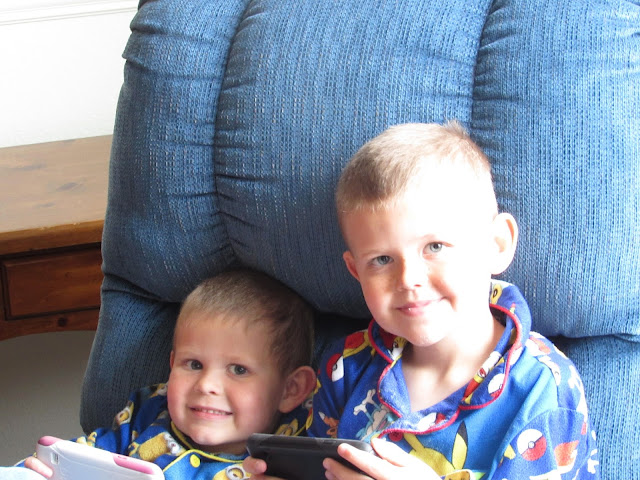 They don't always act like it, but they really do love each other.
Posted by Gram at 6:46 PM No comments:

No More Jumping on the Bed! 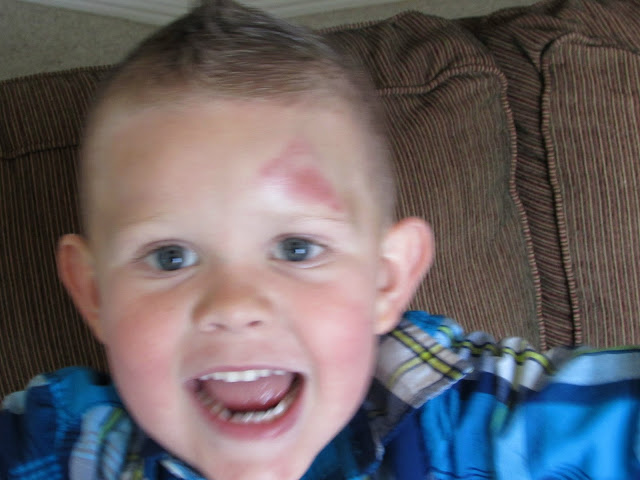 Technically he wasn't jumping on a bed, just a mattress on a basement floor with other kids, but he fell off and bonked his head.
Posted by Gram at 3:44 PM No comments:

The Saturday after Trevin's birthday, he had his party at Boondocks. 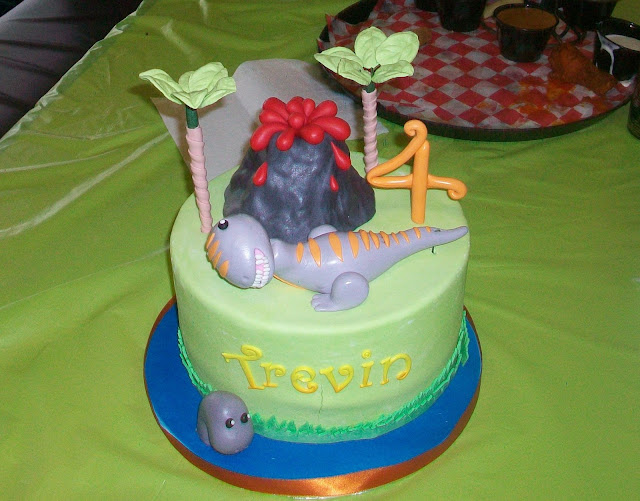 With a dinosaur cake, 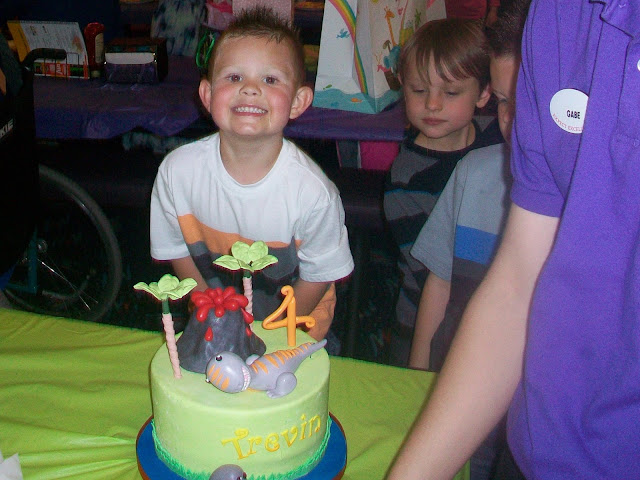 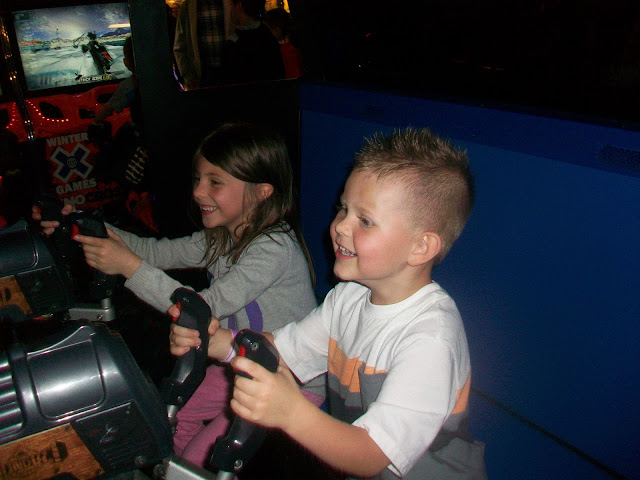 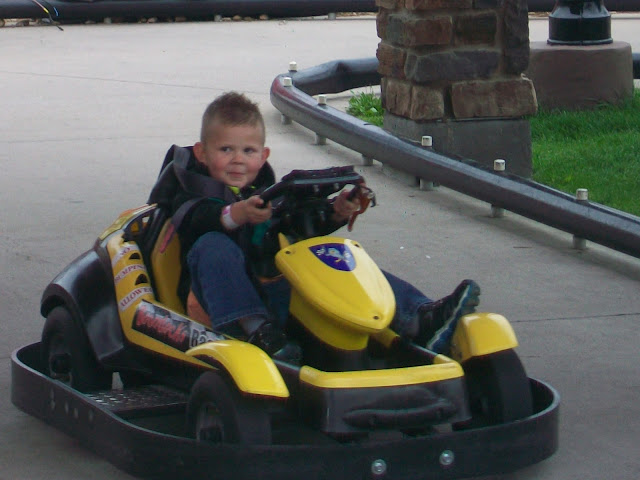 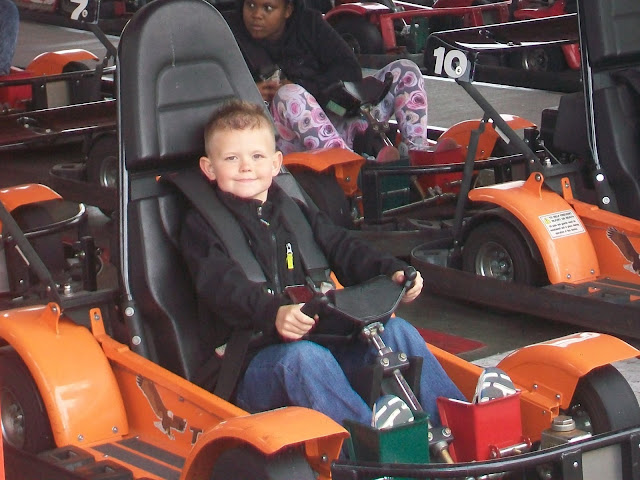