I have a friend who decided she was going to give only gifts this Christmas which were made in the USA.  When she announced this back in August, she made it clear she wasn't asking anyone else to do this for her, it was something she felt she needed to do.  When I waited until a few days before her birthday in October, I failed.  Everything I looked at was made in China.  I finally settled for items not made in China.

We got together a couple weeks ago for Tito's and another friend's birthday.  She and her husband found gifts for both of them made in the USA and she gave us an update of her journey.  Instead of buying tins at Walmart to package homemade goodies for her workmates, she found canning jars are made in the USA and will be using them this year.  She has found small companies making handcrafted items.  She went to Hallmark for Christmas cards and found although single cards are printed here, the boxed cards are not.  With the help of a clerk they found the UNICEF cards are printed here, so that is what she is sending.

I thought making gifts would be the answer, but you have to search to find fabric and yarn that is not made in China.  It took some time and thought, but I have managed to find items made in the USA.  I have e-mailed companies when they do not list manufacturing info on their web-site.  The answer is usually China.  I thank them for their response and tell them I am only interested in purchasing items made in America.  I have found clerks in most stores helpful, but I am most impressed with The Container Store.  They have a section on their web site of items Made in the USA.

I admire my friends conviction and by speaking out she has a few other people aware and looking at what they purchase and that's how you make a difference.
Posted by Gram at 9:19 PM 3 comments:

We celebrated Thanksgiving with the kids on Saturday this year.  I remember all to well going from place to place on a holiday is not so very relaxing.  Add a tired toddler and a tired expectant mother into the equation it is even less fun.  Since the kids left home I have always said I don't care so much about the day we celebrate as long as we do celebrate.  We have traditionally trimmed the tree the Saturday after Thanksgiving, so this year we did both.  Tito and I put up the tree and the other decorations on Friday and the kids hung the ornaments on Saturday. 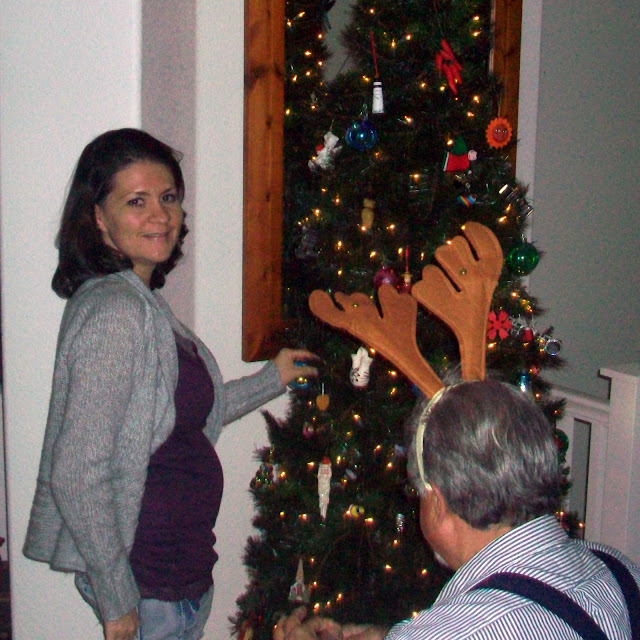 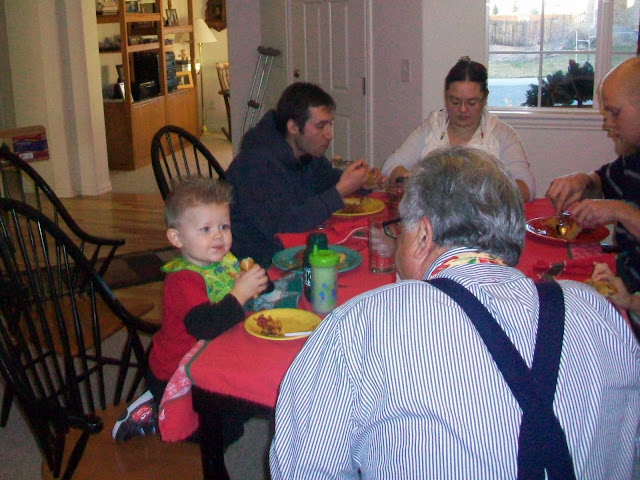 Tito make turkey tacoquito and salsa.  We also had our usual stuffing made with green chilies and chirizo as well as cranberry sauce.  Not completely traditional, but no one complained.  Kaiden handles the spicy food like a pro.  He will tell you it is spicy, take a big drink and ask for more.  Tito is so proud!
Posted by Gram at 9:34 PM 3 comments: 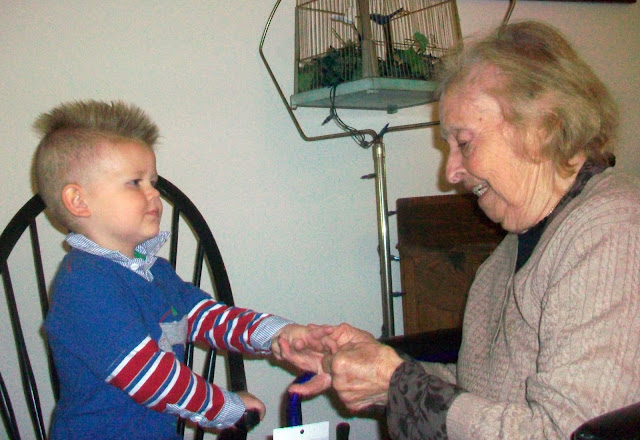 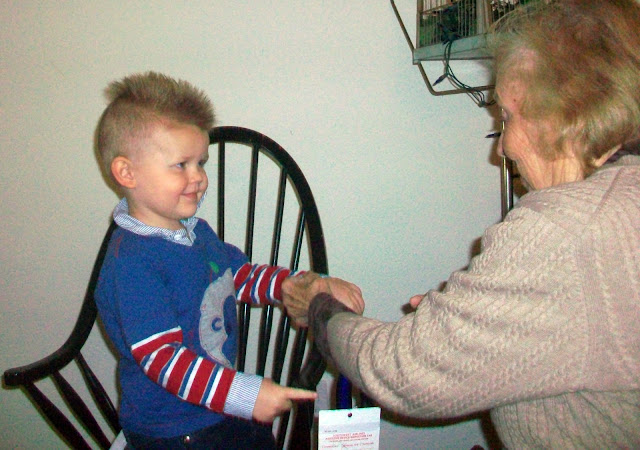 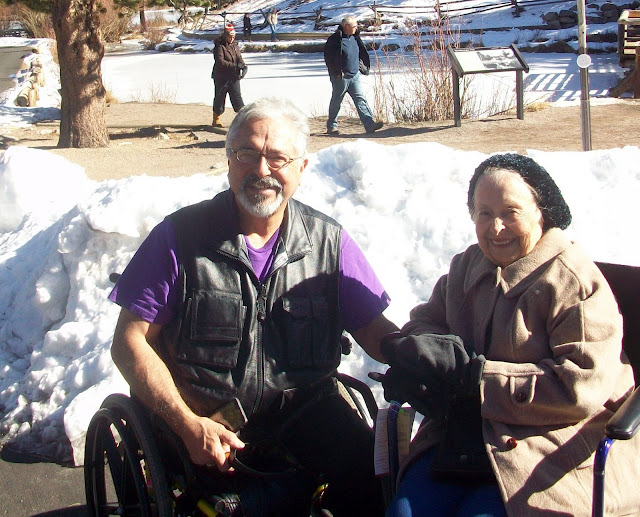 Tito's mother is visiting from California.  She lived here while her husband was stationed at Lowry Air Force Base during WWII.  That is where Tito was born 67 years ago today.  She wanted to see snow. 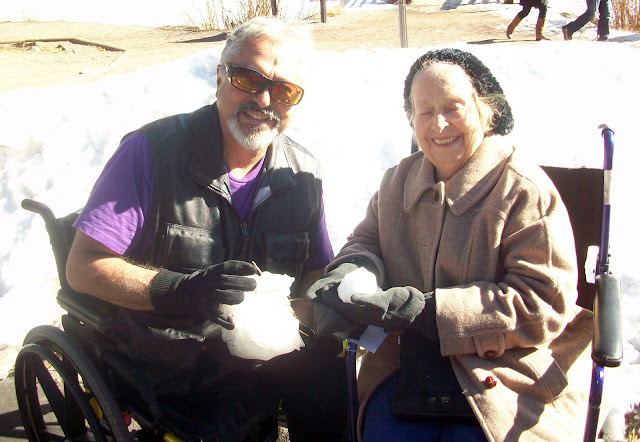 We found some for her last week and even made a snowball for her.

We took last week as vacation.  We stayed in Estes Park and really didn't do much but relax.  We took in the wonderful views. 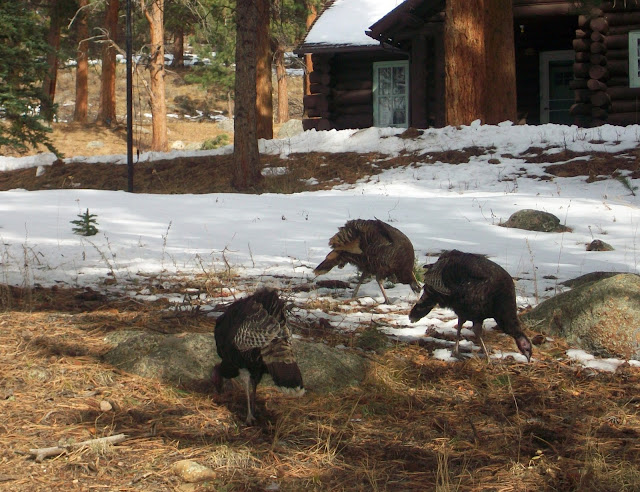 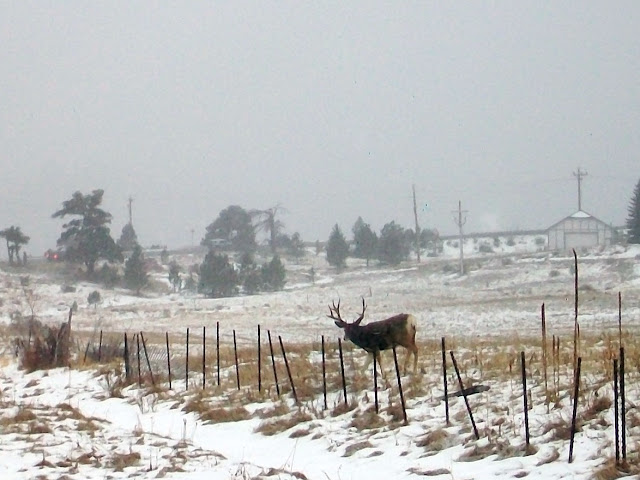 Deer just down the road from where we were staying 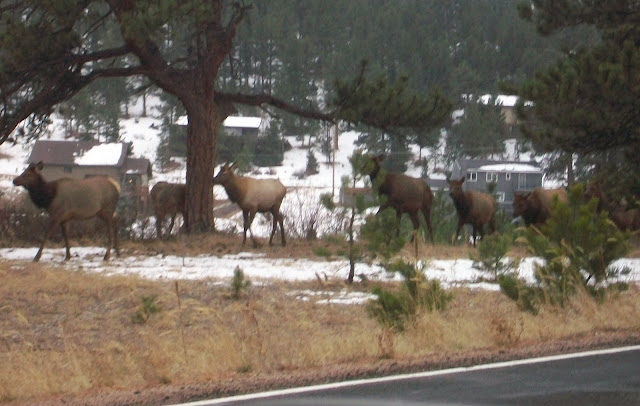 Elk on the road to town 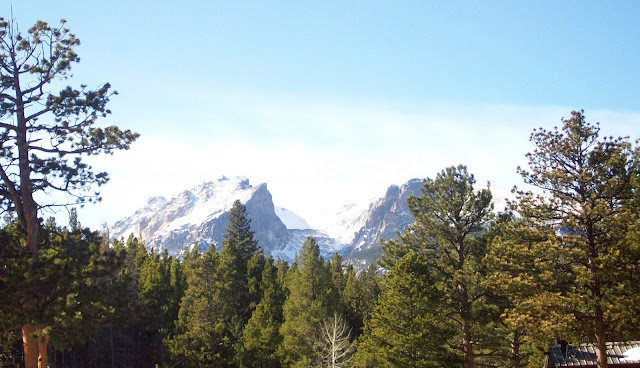 Never tire of the mountains.  When given the choice of beach or mountains - it is mountains for me. 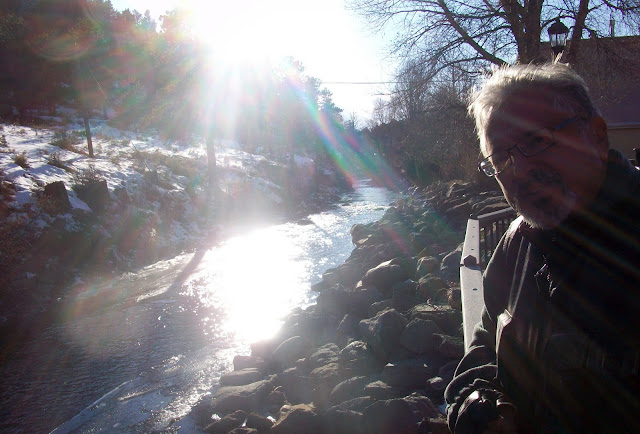 Not a great picture of Tito, but love the sun on the river 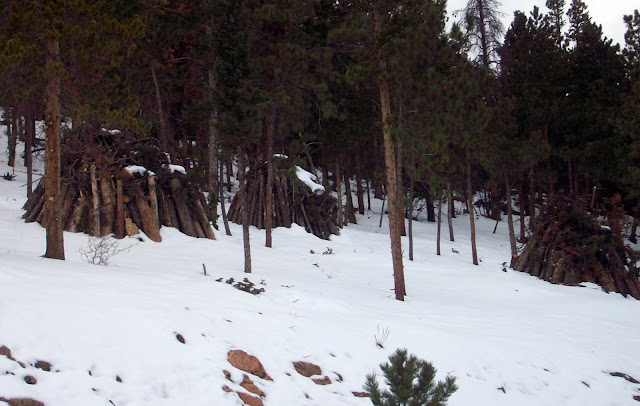 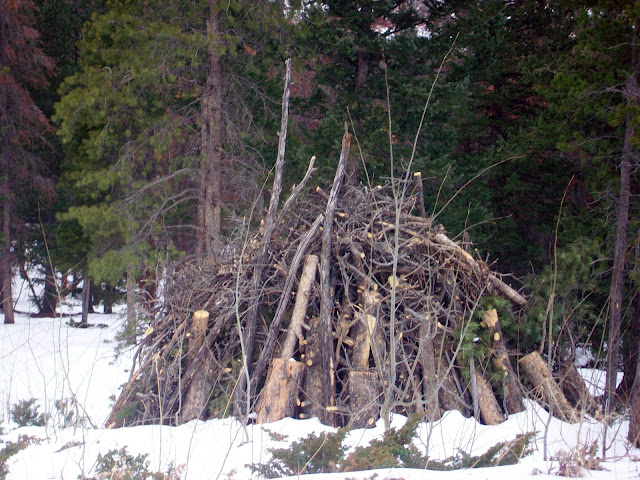 We saw these piles in RMNP.  At first we thought it might be a Boy Scout project - building a winter shelter, but they were all over.﻿  Tito thought they would make great ski jumps when the snow got deeper.  We both said maybe they were alien pods like in Invasion of the Body Snatchers.
We asked the ranger at the entry and he said "Do you want the real answer or the fun answer?"  We told him we wanted the fun one to see if it was anything like ours.  He told us they were building tepee shelters to be able to reintroduce the Utes back into the park much like they reintroduced trout species.
They are really slash piles from dead wood from the Pine Beetle kill and undergrowth that has been cleared.  They are waiting for sustained periods of cold enough weather to do controlled burns.
I like the alien pod explanation myself.
Posted by Gram at 4:03 PM 3 comments: 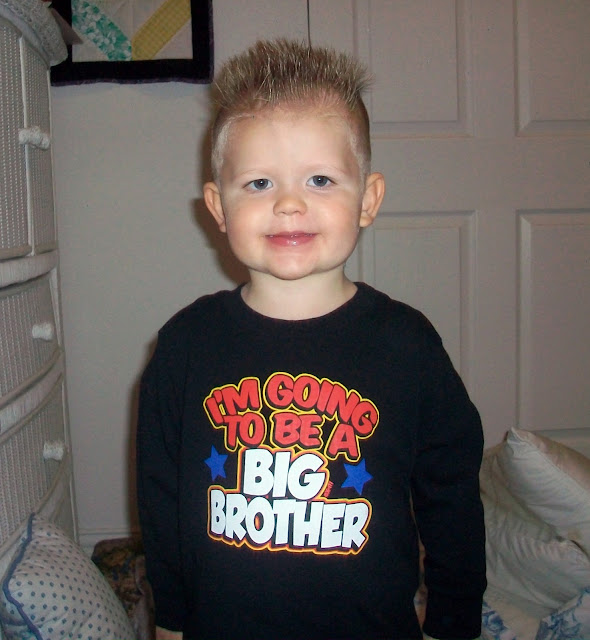 Yes, he is.  May 13th, which is Mother's Day. We are so happy and praying for a healthy Mom and baby.

Where Do I Sleep? 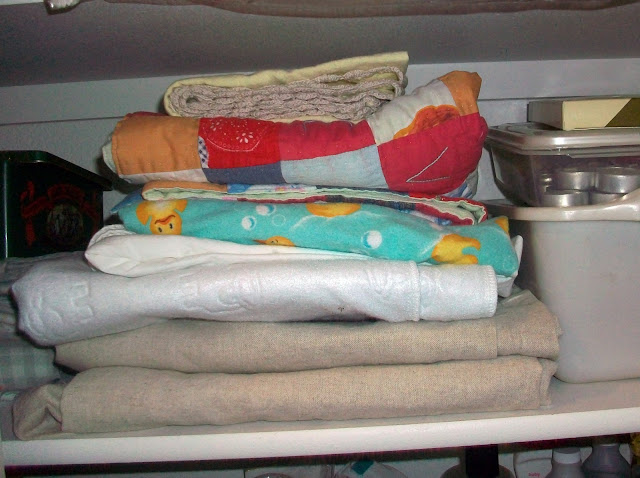 Tito's mother is coming for a visit, so we decided to take the crib down from the guest bedroom to give her a little more room.  I washed all the bedding and put it in the linen closet.  It tugged at my heart a little because Kaiden is growing up too fast.  When he came the next time and went into "his" room to get toys, he said "where's my bed?"  I told him that we put the baby bed away because he was a big boy.  He then asked me where he was going to sleep.  I told him he would sleep in the bed we were sitting on.  I'm not sure he is convinced.
Posted by Gram at 6:35 PM 1 comment:

A little late posting Halloween pictures, but it was a busy week.  Family and friends came over to carve pumpkins. 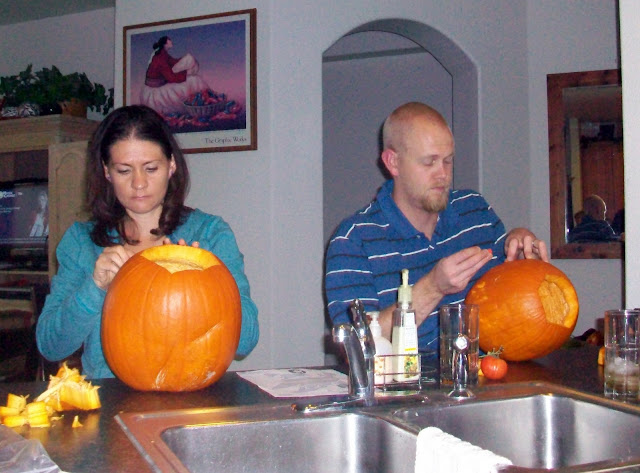 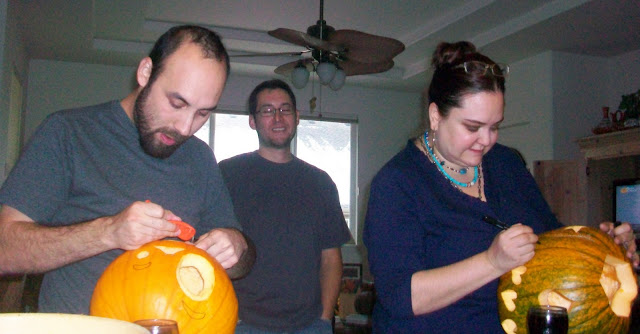 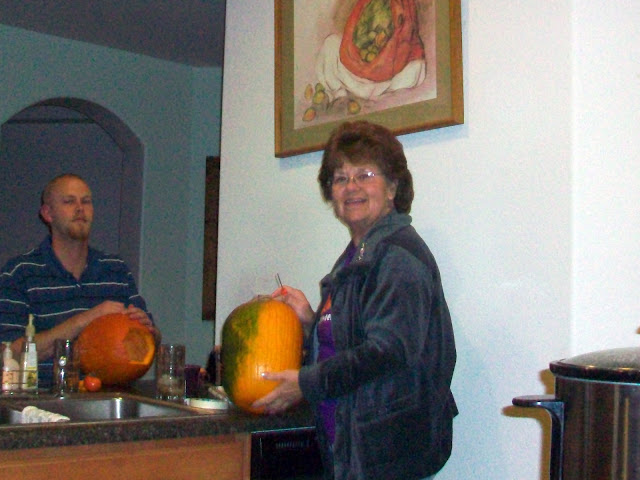 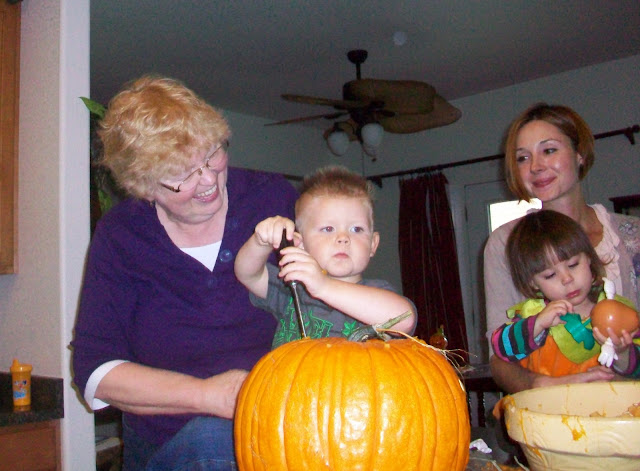 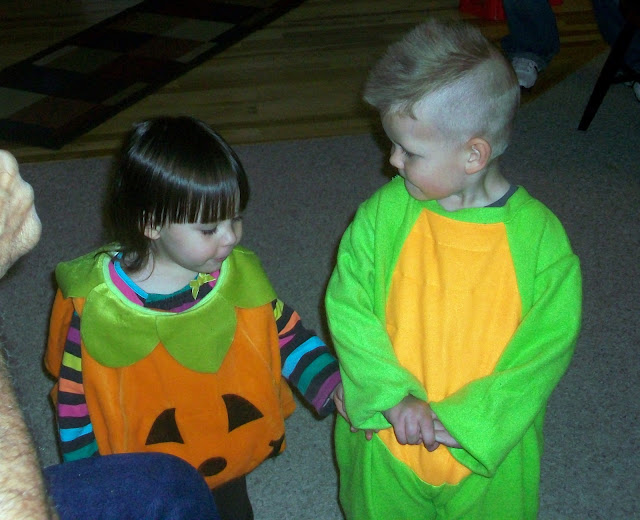 He looks like he is playing hard to get, but they walked around holding hands, chased each other all over the house and he kept calling her "my Mia". 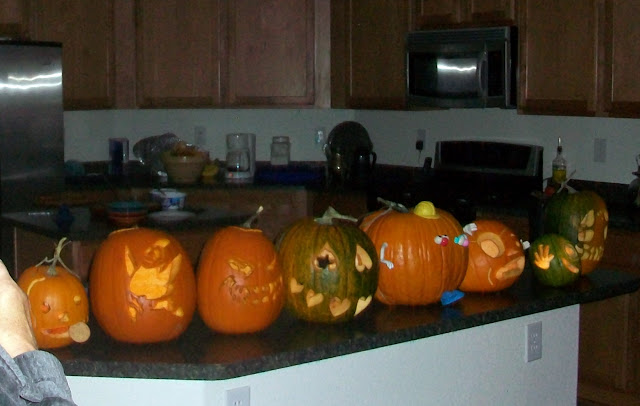 I have pictures of Kaiden and Mia with their full costumes, but am having trouble uploading pictues tonight - it is taking about 5 min per picture.
Posted by Gram at 11:43 PM No comments: