Today was my mother's birthday. I do not have many pictures of my mother and I can't find any of me with her. I guess that is what happens when you are the one taking the pictures. What I do have of my mother is many wonderful memories and examples of her needlework. She could sew anything. I would show her a picture of the latest fashion and she would make it. She quilted and I have several she made for me. She knitted and crocheted. I have many crocheted pieces that I do not use. When we moved to this house three years ago, I was looking for something to hang on my dining room wall. I pulled out these pieces made by my mother (a couple by my sister) and framed them. I now have an original display in my dining room and a tribute to my mother's talent.

Look who came and had birthday lunch with me! Actually, he came and spent the whole day with me and we have had a ball. The kids are coming for dinner tonight. Tomorrow night Tito and I are going to have dinner with John and Janice; Gary and Vivien. But I have a feeling that having him here for lunch will be my favorite birthday gift. 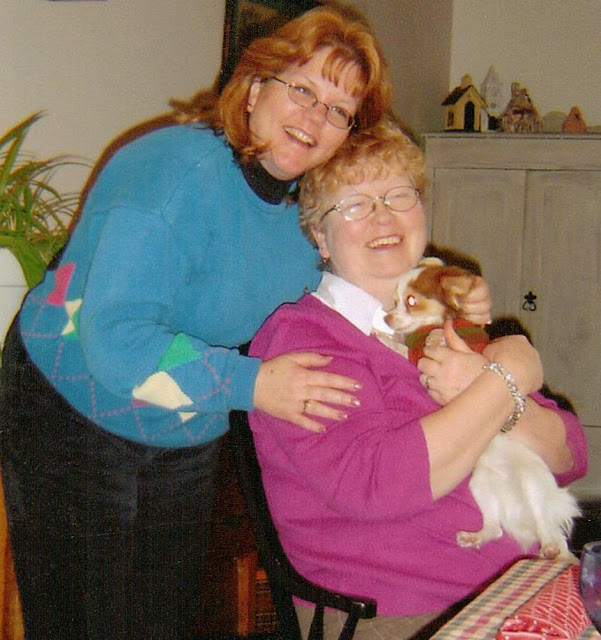 I began working with Lynda in 1977. Our friendship started when the birthday list for February was published and we discovered our birthdays were a day apart. We became dear friends. Our husbands hit it off. I had a baby and left the job, we stayed friends. Lynda had 2 babies and our children played together. My marriage fell apart and Lynda and Jim were there for me and for Nathan. We were included in their family outings (we still laugh about the trip to Water World and the camping trip to Leadville). They moved to California, but we stayed friends. Happy Birthday my dear friend! 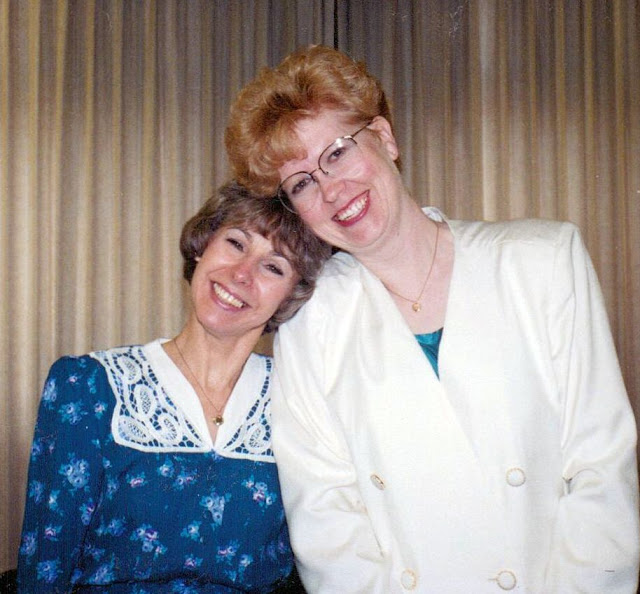 I started working with Fayette in 1986. Our friendship started when the birthday list was published and we discovered our birthdays were a day apart. We were single mothers raising children on our own on a limited income. We came up with great inexpensive ways to have fun - 50 cent movies, sharing popcorn, jigsaw puzzles, Trivia Pursuit games, cooking dinner at home, buying $5 gifts and rejoicing in the great bargains we had found (I found it on a clearance table, I found it at a garage sale, I made it with items I had in the closet). Then Fayette moved to Florida and we remained friends. Happy Birthday, my dear friend! (Fayette, this is the only picture I could find of us together!) 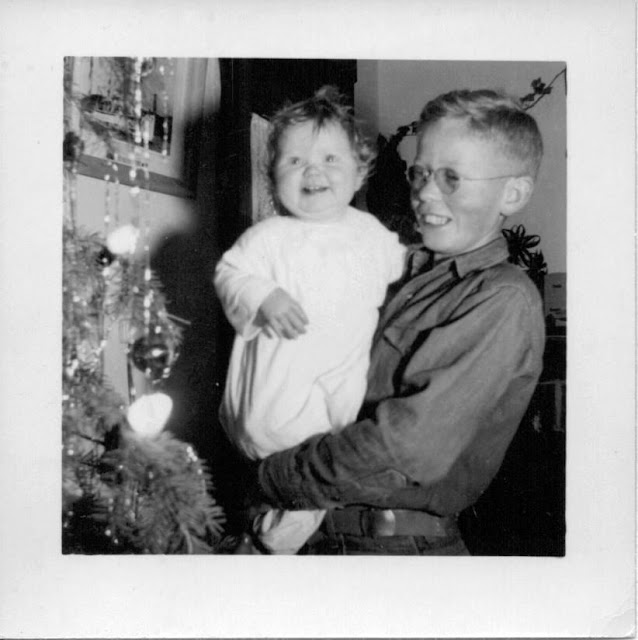 My brother, Melvin, is 12 years and 1 day older than I am - this picture was taken on my 1st Christmas. He is the only sibling that I can remember being at home while I was growing up. I remembered him teasing me all the time, letting me ride between his legs on his motor scooter (until Mom found out), watching him play in the marching band and teaching me to play pick up sticks. I adored him and then he graduated from high school, joined the navy, married and has lived most of the years since on the East Coast. But I still adore and love him and he can still make me laugh. 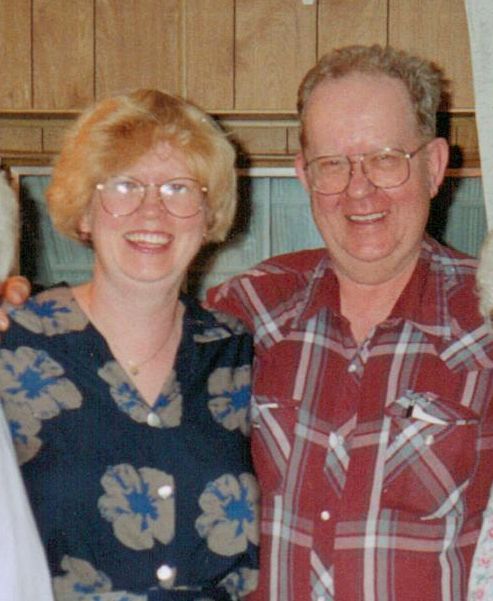 Even as adults, he has continued to tease me, calling me by a childhood nickname that can rile me. 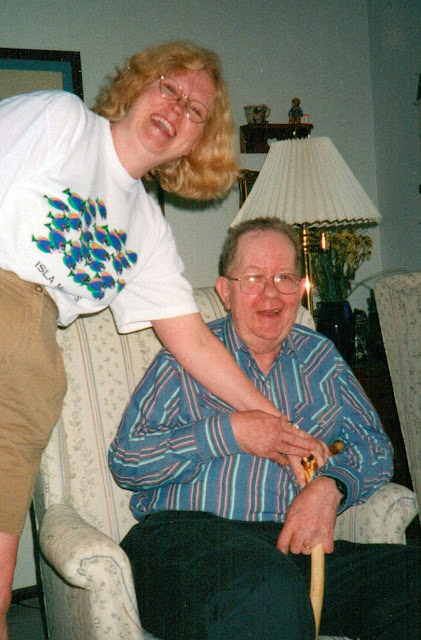 Even after his accident that resulted in a brain injury and loosing his ability to speak, his devilishness comes through. And even though you told me over and over you ruined your 12th birthday - Happy Birthday, my dear brother!
Posted by Gram at 6:35 AM 3 comments: 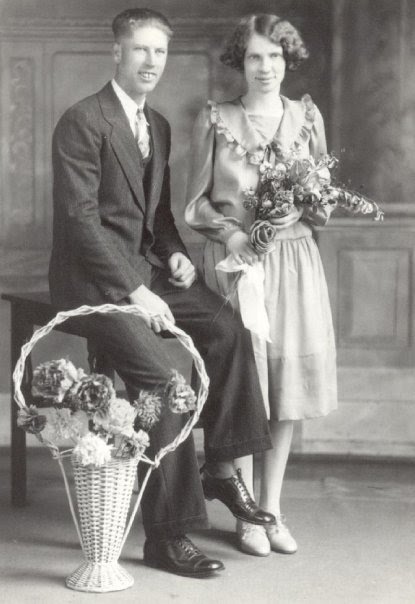 This is my parent's wedding photo. The only one I know that was taken. My mother said she didn't like it because the flowers were props from the photographer, she did not have flowers. My father was 27 and my mother was 3 days shy of turning 20. They were married until my father passed away in 1970, my mother 4 years later.

They raised 5 children -3 of them in the early years of the depression. They did not own their own home until 1966. They never owed money to anyone. They never really had a life without children - my sister was born 18 months after they were married and my father died 2 weeks after I graduated from high school. They were good, honest, hardworking people. I have never heard anyone say anything bad about them. My brothers and sisters and I never heard them fight - they raised their family in a loving home. They provided for us the best they could - there are many stories of the struggle raising a family in the depression and later in WWII during rationing - but we never felt anything but love.

I loved them both, worshiped my father and regret to this day that I was never able to have an adult relationship with them. I think it would have been a great one.
Posted by Gram at 7:32 AM 1 comment: 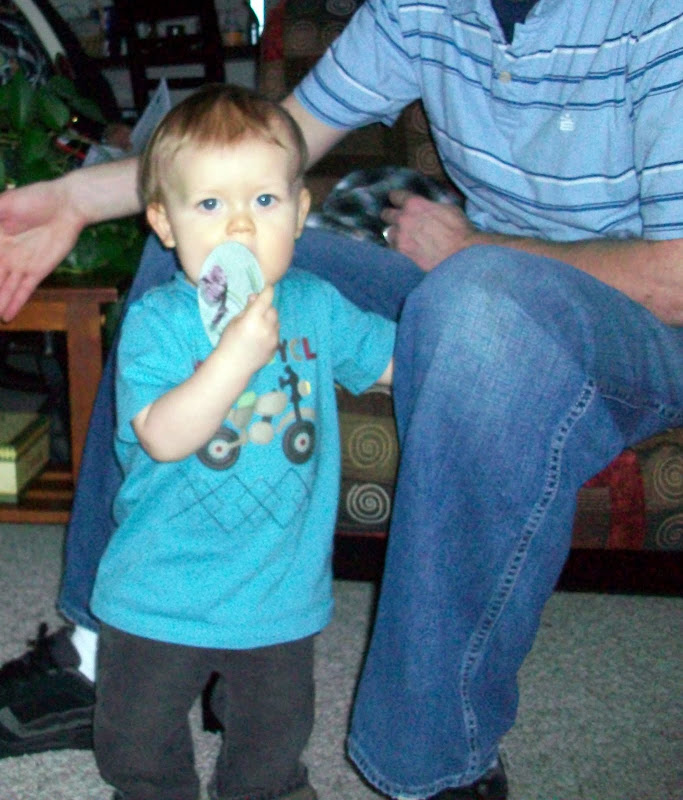 Kaiden has been standing up and walking around furniture for a couple of months. This week he started walking 4 or 5 steps without holding on to anything. Another milestone.

Ash Wednesday begins my favorite time of year. I love the message of Lent, the discipline we are called to, the journey of faith that concludes with Easter. I know some people view lent as a time of deprivation, but I look at what it adds to my life. We are called to examine ourselves, to draw closer to God, to strengthen our relationship with God. How can that be anything but good?
Posted by Gram at 9:33 PM 2 comments: 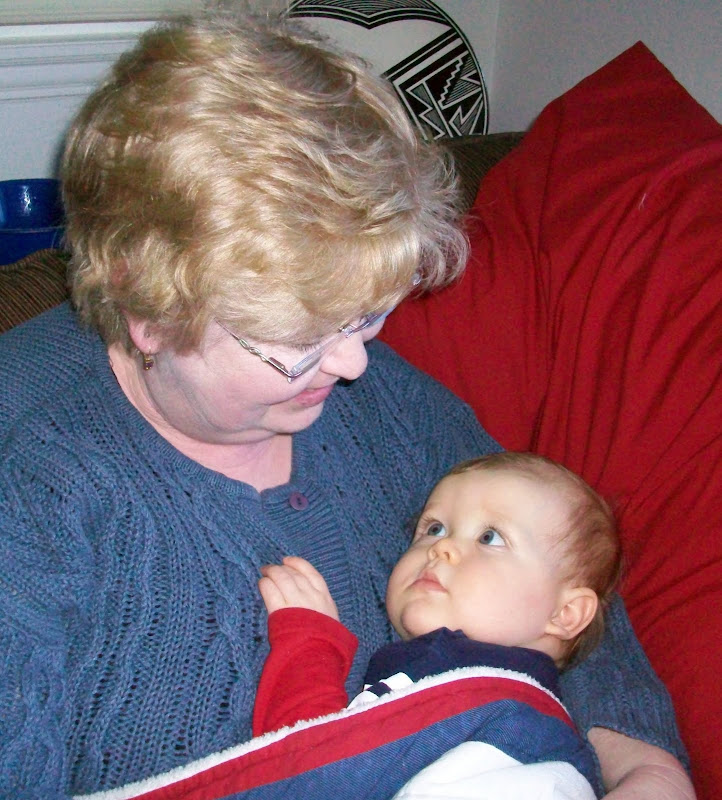 I got to spend part of Valentine's Day with this Sweetheart while his Mommy and Daddy went out to dinner.
Posted by Gram at 9:29 PM 3 comments: 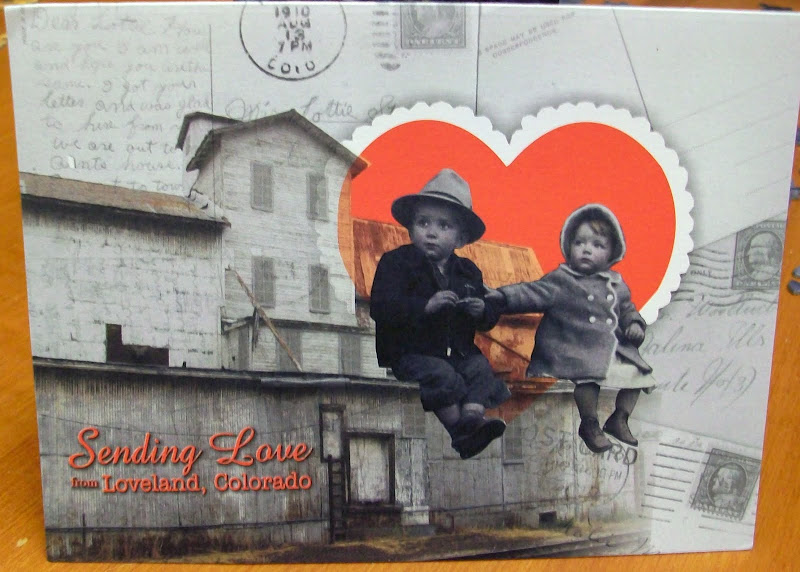 I was born in Loveland, Colorado, the Sweetheart City. Five years before I was born, the city started the Valentine re-mailing program. Thousands of cards are sent to the post office each year to be stamped with a cachet and postmarked from Loveland. My sister still lives in Loveland and each year sends the official card. This is the card I received in the mail yesterday, postmarked Loveland and hand stamped with this year's cachet below. 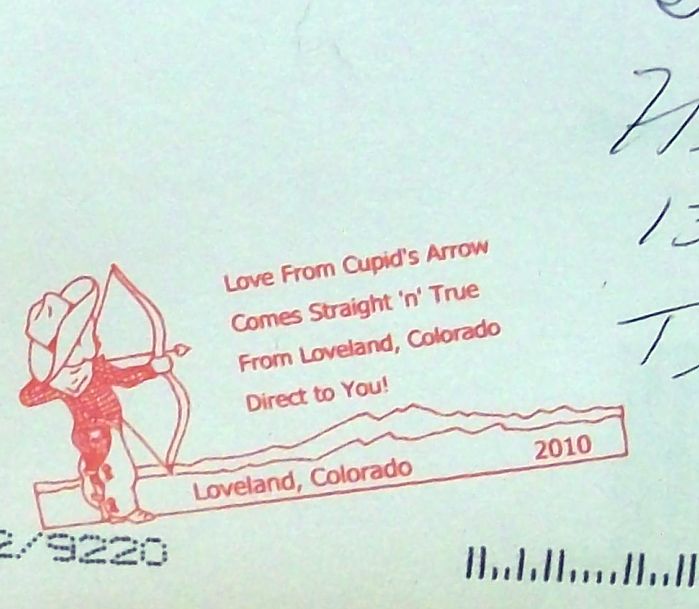 If you would like to read more about this - click here -Cards.
Posted by Gram at 8:20 PM 2 comments: 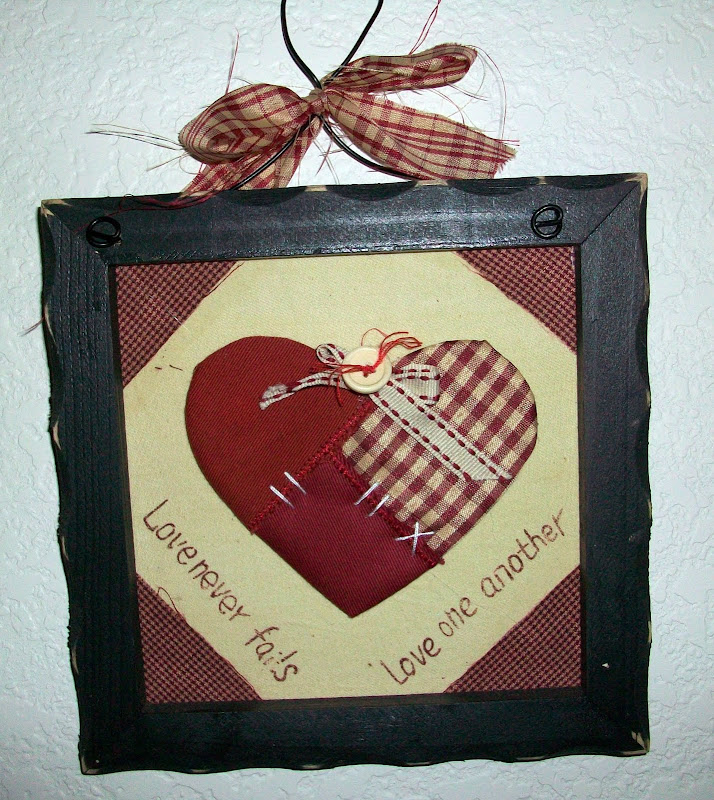 Our Women's Group at church has a Secret Prayer Sister program. Each year we draw a name and pray for that women all year long. We remember our Prayer Sister throughout the year with cards of encouragement and little gifts on their birthday and other holidays. Everyday you pray for this woman and her needs. This has been a wonderful blessing for me. I have been more faithful in my daily prayers. It is very comforting to me to know someone is praying for me everyday. I have formed new friendships and strengthened old ones.

Last Thursday night we gathered for dinner and our reveal. It is so much fun as we guess who our sister was for the year. I had no idea this year and was very surprised when I found out it was Christine. She was not even on my list of guesses. We have known each other for several years and she is so talented (has a beautiful voice, crafts, renovates homes). I was very blessed to have had her prayers over the past year.
My reveal gift from Christine is the framed heart pictured above. I have it hanging in my kitchen and will remember her every time I walk by. I have several gifts from prayer sisters throughout the years - a book from Becky; a little pot holding my pens and pencils at work from Leslie; a dragonfly pin from Kari; a stuffed dog from Dianne; a candle holder and many many beaded baskets (which is a story for another post) from Lori. Each time I come across one of these items I am reminded of these dear women and their prayers and I take a moment to say a little prayer for them and for my new sister this year.
Posted by Gram at 6:03 PM 2 comments:

Thirty years ago, Nathan's father and I found a little red wagon in an antique store, bought it, repainted it and gave it to Nathan on his first birthday. He loved that wagon and played with it for years. After he abandoned the wagon for other things, I used it by the Christmas tree filled with presents for years. Since moving to the new house the wagon has been in the garage. Last week I brought it into the house and Tito cleaned and polished the wagon and we gave it to Kaiden. 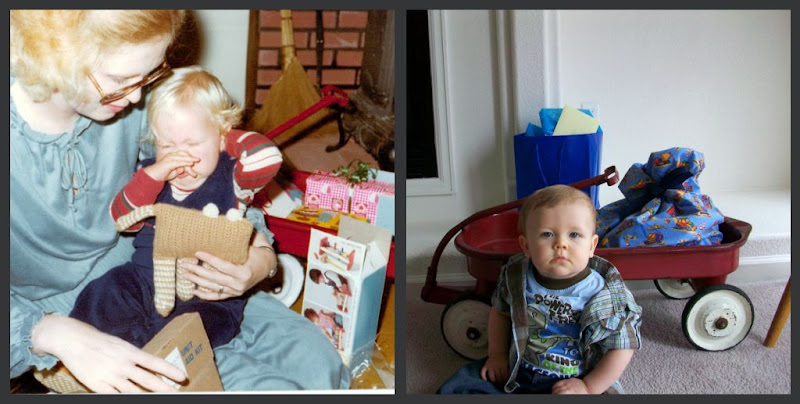 As you can see, the wagon isn't as shiny and has paint chipped off the wheels, but we hope Kaiden enjoys it as much as Nathan did.
While I was digging through old photos, I found the one below of Nathan devouring his first birthday cake. He wasn't as shy about it as Kaiden. 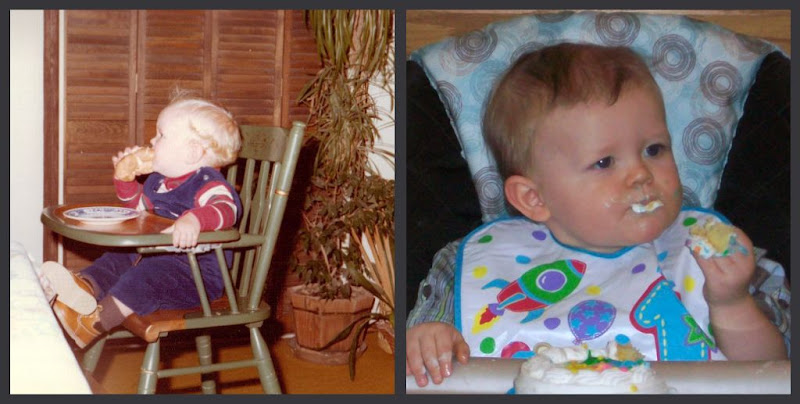 Nathan's cake was a small angel food I baked and did not frost. I didn't want him to make a mess! You think I might be a little compulsive?
Posted by Gram at 9:29 PM 3 comments: 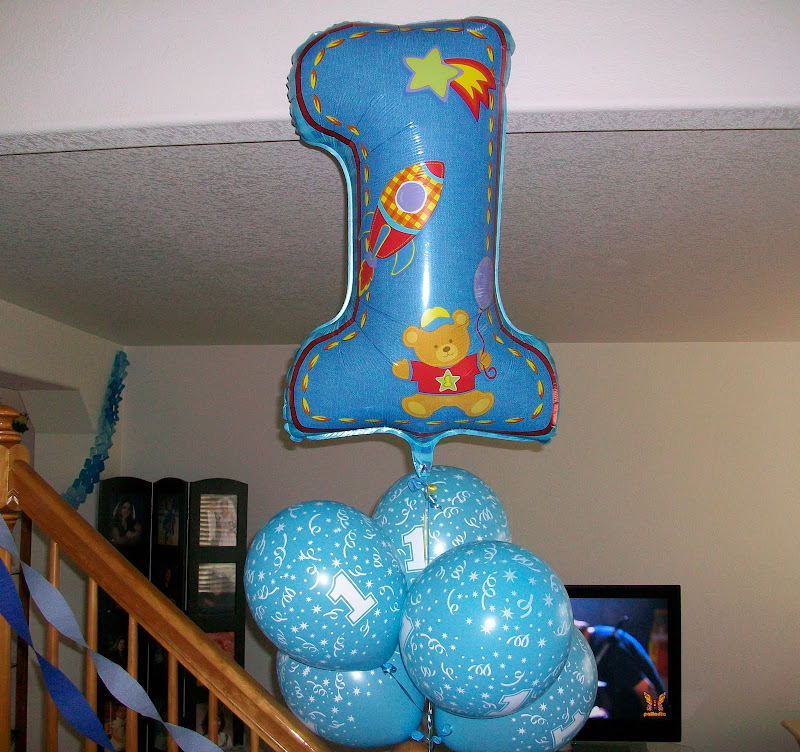 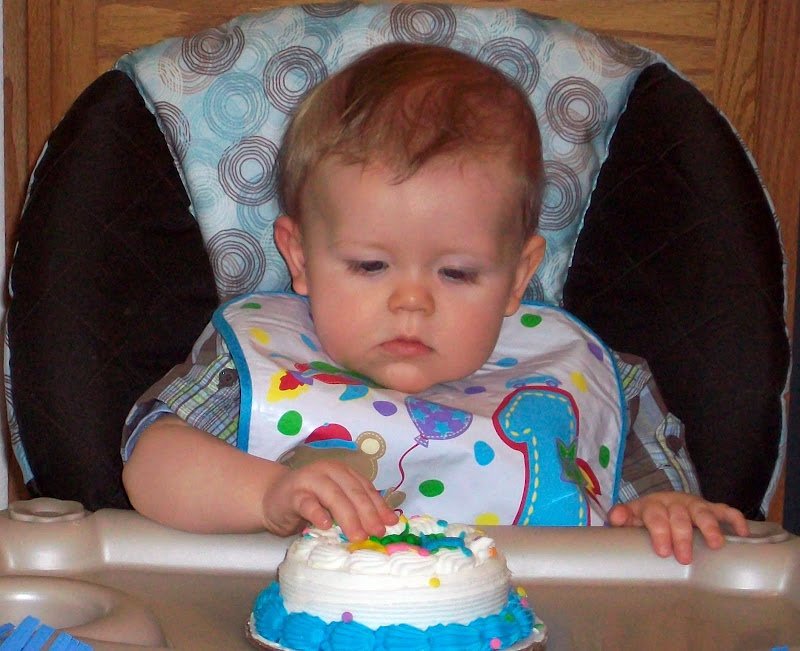 He approached his cake with caution 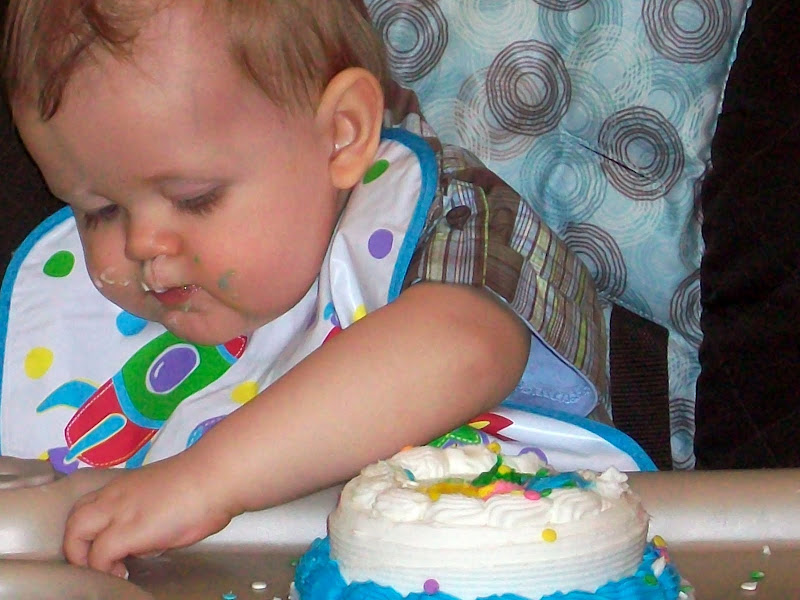 He would dip his finger in and eat the frosting but didn't grab a handful until Stacy put his hand into the cake. Even then, he was more concerned about the little pices of confetti sprinkles. 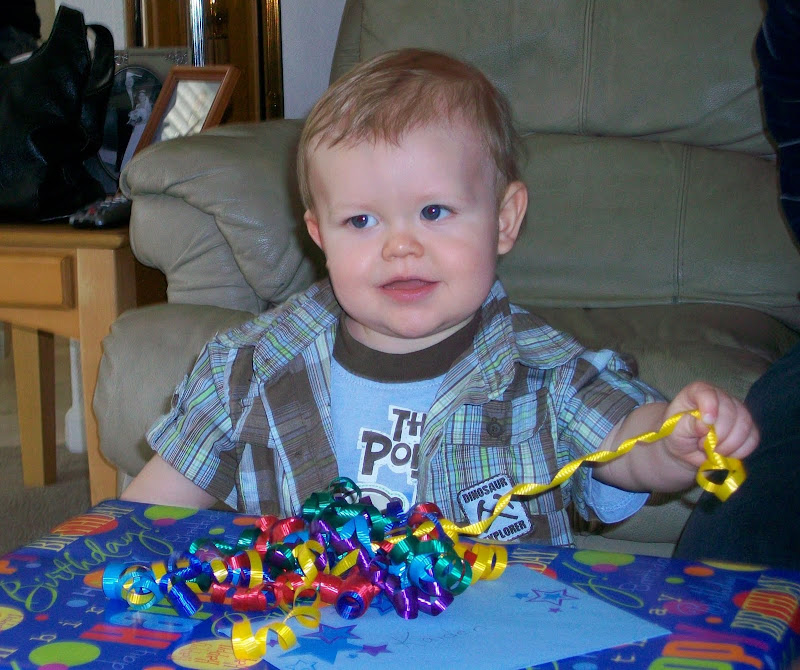 He didn't have much interest in the packages 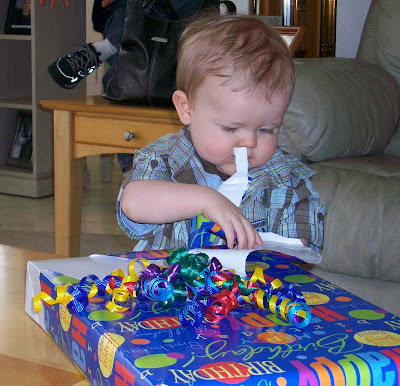 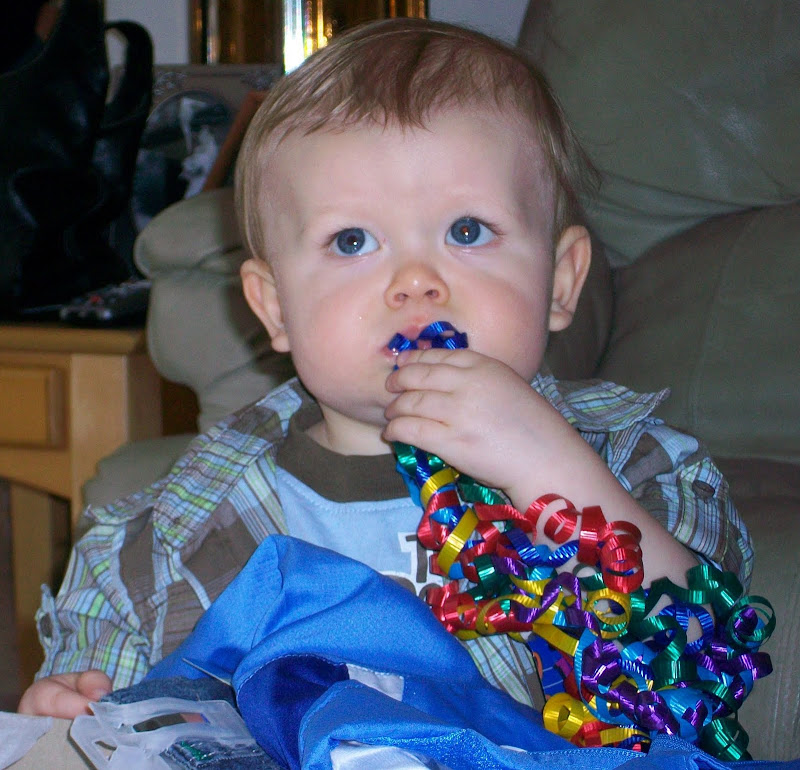 He received mostly clothes which weren't too exciting. In the end he was more interested in the ribbons and the boxes.
More on his birthday coming up.
Posted by Gram at 3:03 PM 2 comments: 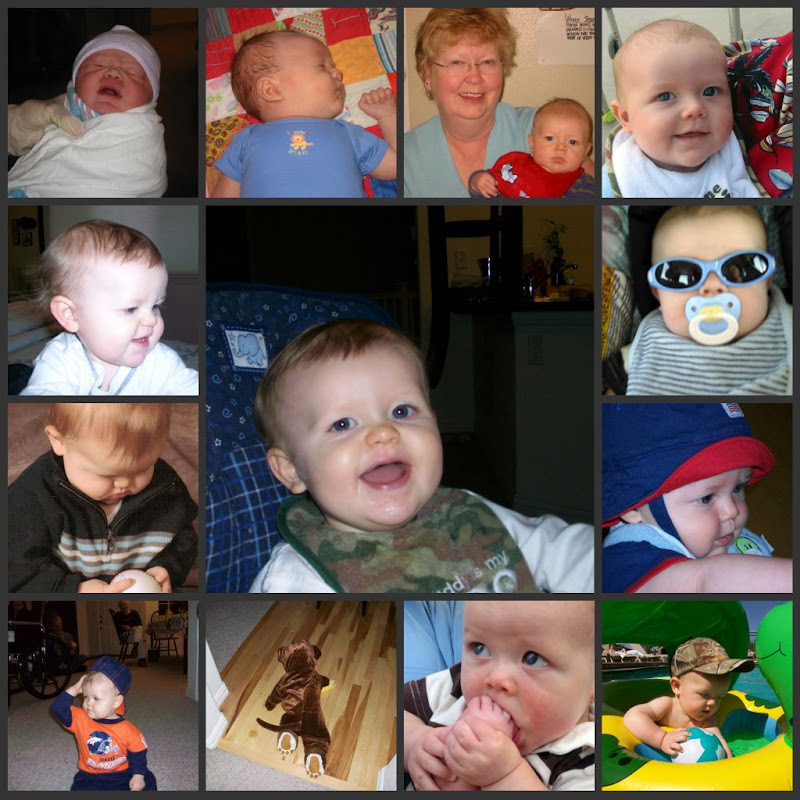 Happy First Birthday to our sweet little boy.
You have changed our lives so much.
Little did we know how you would steal our hearts and bring such joy.
It has been a year of wonderful moments.
We were told how different being a grandparent is from being a parent, but didn't believe.
We now believe.
Love Gram and Tito
Posted by Gram at 6:00 AM 2 comments:

Decided to change the look of the blog because tomorrow is a very special day.

After watching Lost last night, all I can say is WOW! And I'm still Lost.

Hope you will stop back tomorrow to see why it is a special day.
Posted by Gram at 10:31 PM No comments: